A night out for new parents 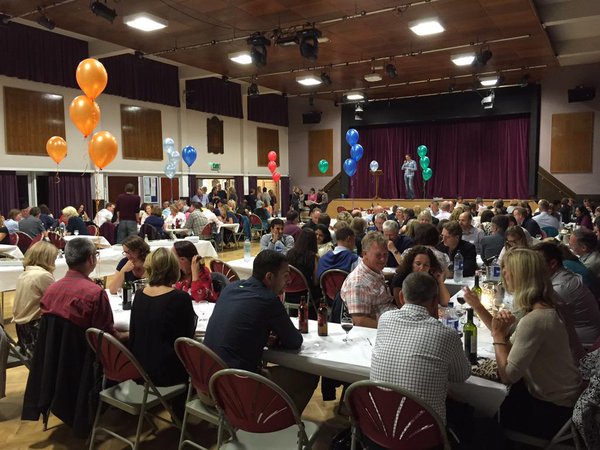 There was an excellent turnout tonight for the Year 7 Parents Social, the traditional first event in the Friends calendar. All six forms were well represented, and there was a relaxed and cheerful atmosphere in the room.

Mr Colquhoun led the activities, assisted by the form tutors who took the opportunity to catch up with the parents of their charges and offer reassurances as to how the boys were settling in. After a round of dingbat puzzles there was a true-or-false quiz, both rounds of which were won by the same parent, securing two bottles of wine for her table in the process. There's a good way to make new friends!

Dinner was then served, produced by the catering company that provides school meals for the students and so an excellent showcase for the quality food the students have to eat. As the last of the macaroons were being cleared away, Mr Graham then stepped up with the results of the Year 7 Questionnaire. After some results that are consistent from year to year (favourite TV show is The Simpsons, favourite books are the Cherub series), Mr Graham reached the section that always has the form tutors sit forward: the votes for scariest teacher. Mr Burn was delighted to receive a couple of votes this year, but the runaway winner was Mr Keen with 106 votes out of the possible 180. Given that his subject of Computing also came in the top five for favourite subjects, he's clearly striking the right balance!

As always, this event was a great way to introduce new parents to the school, and an opportunity for the class reps to start to get a feel for how they can support their form. We give thanks to the Friends of DCGS for organising a lovely night out, and look forward to the rest of the Friends calendar to come this year.