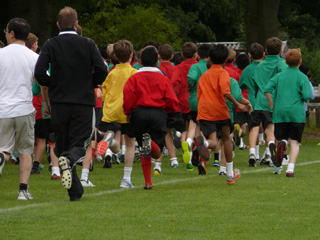 Last week saw the opening of the Challoners inter-house competition with the famous cross country event. A lap of the School field followed by a run around Hervines Park was the course; as high a finish as possible was the aim.

Over 560 boys took part from years 7-11, with each and every one earning at least one point for their house. From the 178 boys taking part in Year 7, Thorne ran out overall winners; however Cameron Reid from Newman was the individual champion. In Years 8 and 9, Foxell were the winning house in both races with Michael Hazel and Seb Mills (both Foxell) victorious in their respective competition. The combined race of Year 10 and 11 saw 179 runners, of which Will Perkin and Holman came first. Mr Pontin said it was a 'great start' to the House competition.

It was not all about the boys however, with several members of staff joining them in competing in the cross country run. Congratulations to the winners and all those who took part.