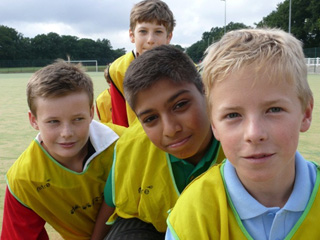 The standards have risen again. This week the Sport and PE Team held the football and rugby trials. For some a daunting prospect, far more for the new pupils: however, none of them failed to impress, all were up to the mark and raring to go.

Over 150 boys turned up each evening of the week, for both sports, which made the teacher’s job even harder! As for the older boys, they had all improved and the bar was set even higher. For the new Year 7s it was a mixture of excitement and apprehension... I am speaking from my own experience!

On the 5th and 6th of September, 60 year 7 students took to the field, some playing rugby for the first time. The boys were put through their paces; testing handling, rucking and going into contact. The Year 9 squad players have already come together in a meeting and the full squad has been finalised. The Year 7 A and B teams are still being finalized but will go up in the next couple of days. Both squads will continue to train every week and prepare for what hopes to be a successful season. The Year 8 trials were on the 11th of September and the squad will be up shortly.

This week has also been time for the usually competitive football trails. About 50 boys from all years attended for each night. They were all put under the coaches’ eyes in some games, and had a chance to show their passing, shooting and dribbling skills. The Year 9 A and B squads have been put together and the A team have already kick-started the season with an emphatic 4-0 victory against John Hampden. The Year 7 football team is still going under second trials and will be decided soon. Year 8As have also had a nil-nil draw against John Hampden, but full trials will happen on the 17th of September.

We hope this season will be one of victory and major achievements in all sports, in order to keep with the Challoner’s tradition. As well as the School teams, major events in House sport will take place as usual this year, starting off with House Cross-Country this week, Year 10 on the 10th of September, Year 7 on the 11th, Year 8 on the 12th and Year 9 on the 13th.