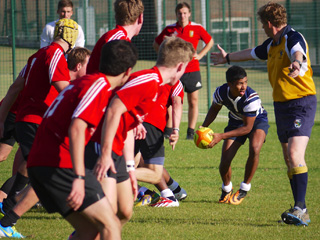 On Friday the 20th of September Challoner's 1st XV faced off against the Australian side of Cathedral School in a gruelling encounter.

An extremely physical side, the Australians proved deadly in the scrums and rucks in the opening moments of the game, scoring a try as well as adding a conversion. However, the home team fought back almost instantly, gaining good territory on their opponents side of the pitch. Challoner's immediately put the opposition under pressure, resulting in Cathedral’s forwards conceding a penalty. The team opted for a kick, which Jake Cutter converted bringing the score to 3-7.

A further penalty soon after for Challoner's meant the match looked to be close with half-time approaching; however a well-worked move from one of the Cathedral School wingers saw them 6 points ahead of the home team at the break after another try, which brought the half-time score to 6-12.

Challoner's entered the second half with the win still in their sights, but a strong performance from the away team made it difficult to break them down. The Australians added a further twelve points to their tally bringing their score to 6-24.

Showing good heart, the Challoner's team replied with a hard fought try scored by Jake Cutter. The follow-up conversion glanced just wide of the posts, meaning the home side trailed behind by thirteen points upon entering the last quarter of the game.

An outstanding offload from Matt Holmes provided Challoner's winger Peter Simpson enough space on the wing to score a further try, which was again converted successfully by Jake Cutter. Even though the comeback appeared to be on for Challoner's, the Australian team showed immense physical presence on the pitch, scoring a further three tries and two conversions, taking the full-time score to 18-43 to the visitors.

A resolute team effort, defined by a ferocious tackling performance from Oli Oakley, means the Challoner's boys can still hold their heads up high, having gained valuable experience playing their Australian counterparts.