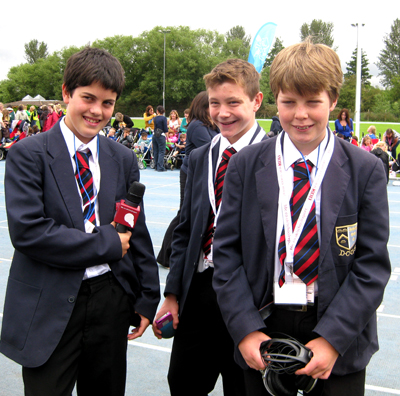 The Olympics and Paralympics may be over but three year 10 students still remember how the Olympic Torch Relay gave them the opportunity to extend their experience in reporting following their success with the School Report Project in March. Paddy Dwyer-Cummins, Jamie Hinch and Michael Warwick were pleased to be invited to report on its arrival at Stoke Mandeville Stadium along with other local school children. They were met by Hannah Jones, their link reporter from the BBC, who showed them around the venue and the recording equipment they’d be using. It didn’t take them long to get started and soon they were sending in photos to the main BBC Torch Relay web page as they awaited the torch's arrival as well as tweeting and blogging.

The School Reporters were interviewed live on the Nick Coffer Show on BBC Radio Three Counties, with reporter Simon Watts describing the scene before handing the microphone to the students. “It’s great because you've got all the schoolchildren shouting and screaming and waving their flags - all the different noises coming together," said Jamie. “It’s given us an insight into journalism that would be difficult to get anywhere else."

The reporting team interviewed some local primary school students and also members of the Paralympics wheelchair basketball team. It was a unique experience that the three students will always remember and has fired up their enthusiasm for developing their interest in reporting.