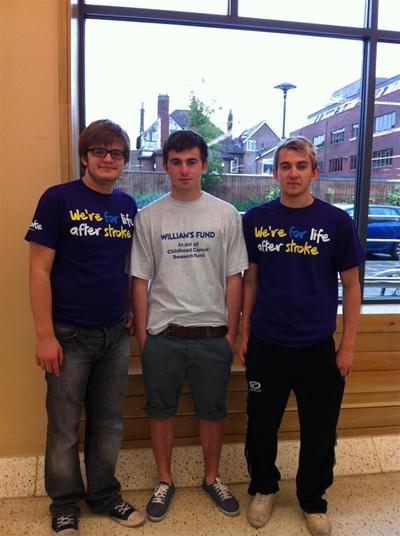 Toby Emerson and Marcus Hazelwood joined an elite club of swimmers by becoming the fastest two-man relay team to swim the English Channel this summer following the completion of their A Levels. Both students had wanted to do something great to make a real difference in the year of the Olympics and the opportunity to raise money for two charities very close to their hearts, William’s Fund and The Stroke Association, spurred them on during the many months of hard training needed to achieve this goal.

The date of the swim was brought forward by four days due to weather conditions and it was Toby who started the journey at 3am whilst it was pitch black and the water was 13 degrees. He worked hard to build a rhythm and despite being stung by a jellyfish he completed the first two hour stint. Marcus took over and in his first session had to contend with a pod of around twenty dolphins which he could enjoy once he realised they weren’t sharks!

It was a tremendous challenge to take on 34km of the busiest shipping lane in the world, dodging commercial ships and braving such cold sea conditions and they completed the swim in 11hours 37 mins, making them the youngest and fastest team in 2012.Their estimate of raising £6000 was way off as their remarkable achievement was recognised by the supporters and to date they have raised over £80000.It had taken 2 years of planning, alongside the commitment needed for their A Level preparation and that determination will hold them in good stead as they both move onto the next stage of their academic life. We wish them further success in all they do.