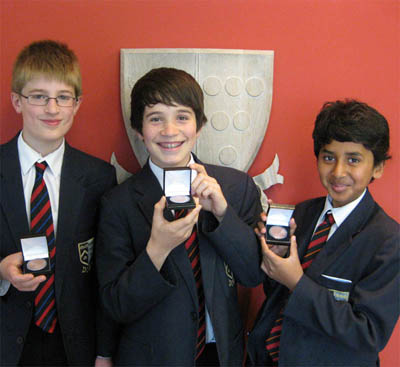 During the summer term Challoner’s celebrated a clean sweep of medals in the Junior Maths Olympiad with one gold and three bronze medals for the four year 7and 8 students who took part.

All four students, Ian Fan, Josh Jones, Tom Haslam and Amir Shakir gained distinction in the three hour exam and came in the top 25% of the 1200 students who sat the papers, who in turn were chosen from the quarter of a million year 7 and 8 students who sat the first round Junior Maths Challenge.

In addition to this success, Ian Fan, year 8, was selected to attend a week’s intensive maths training camp at Queen’s College Oxford. The event is for 22 students under the age of 18, who have been selected as some of the most able young mathematicians in the country.