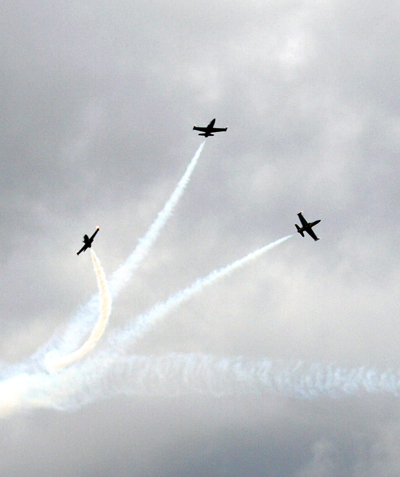 The summer term ended with an interesting visit for a group of engineering enthusiasts when they travelled down to the Farnborough International Air show. To start the day they attended two lectures, one on the future of flying presented by Airbus which demonstrated how flying may evolve in the future, the introduction of greater speed, comfort and more environmentally friendly aircraft. The second lecture was on how planes fly, discussing various new materials which are being used in modern aircraft and how planes actually gain lift.

An area called the "innovation zone" was the next target for the eleven students and two staff. This area contained many demonstrations from various universities and companies related to aircraft and the production of aircraft. These included ideas such as a robot which could solve a Rubik's cube in roughly 2 minutes, or the scale model of a jet engine made out of Lego which caught the student’s imagination and showed there really is no limit to what you can do. As for the air show itself, it was a spectacle that could only be matched by the sheer amount of noise some of the jets created. There were aircraft ranging from the Airbus A380 to the F-18 fighter jet. These aircraft did not fail to impress with their manoeuvrability and speed. The F-18 felt like it was creating its own earthquake every time it passed by, and left everyone extremely impressed.

Overall it was a very exciting day and one that has really shown the students the range of career opportunities available in the aircraft industry.