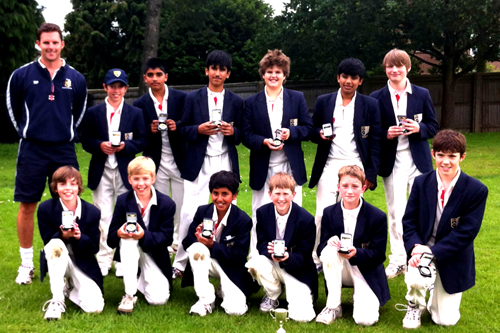 The end of last term saw Dr Challoner’s Under 12s defeating Aylesbury Grammar School by 5 wickets to claim a County Cup to end a great season. The team had played exceptionally well in the nine games leading up to this final wining all matches but one.

Challoner’s won the toss and put AGS into bat. This decision was rewarded when Humza Alam and Nouman Alam bowled tightly to restrict AGS to 15-3 off of 10 overs. As the pressure on the AGS batsmen continued to build, the team continued to bowl well, eventually being set a target of 59 for victory. A fast start from Luke Dawson saw them racing to the total only to lose some quick wickets due to fine bowling from Max Hutt. However some stern resistance from Henry Moore and Amri Shakir saw Challoner’s home with 5 wickets remaining.

The team will now go through to represent Buckinghamshire in the National Cup next year.