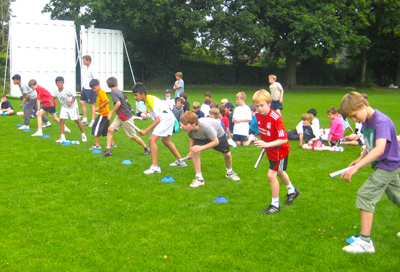 The new Year 7 students were invited to attend the annual sports camp during the summer holidays and as usual the attendance numbers were high with over 130 students joining in the fun packed days.

The students were grouped with their new form to give them the opportunity to get to know each other before the autumn term starts which always helps them settle in well. Throughout the week they played a wide variety of sports such as rugby, hockey, cricket, and football. During athletics the students had a great time using the large sponge javelins-a highlight for many!

The week culminated in three tournaments; cricket, athletics and The World Cup for football. The students had an exhausting time but left full of enthusiasm for the new term when they’ll get the opportunity to train under the guidance of the sports team here at DCGS.