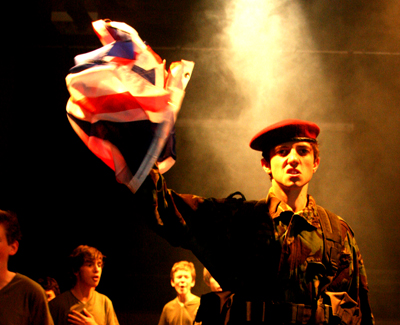 Last term ended on a high with an excellent production of Shakespeare’s Henry V. The Summer Play has become a highlight in the school calendar, and year on year has completely revolutionised the genre of the ‘school play’. From the moment the Chorus came on and appealed to the audience to use their ‘imaginary forces’ on the school hall to envisage a kingdom for a stage and the vast battlefields of France, everyone was transported instantly from Amersham to Agincourt.

The actors didn’t use a conventional stage; they performed on the floor surrounded by the audience. The actual stage was only used for entrances and some parts of battle scenes. Most of the action took place on the floor, lending the whole arrangement an air of intimacy. The lighting and sound, designed by crew members, were also used effectively to change the ambience during the scene shifts from the Palace to the battlefield, and came into their own in the battle scenes which almost became something of a sensory overload!

The cast and staff worked extremely hard to make this production a huge success. Nick Brabbs’ stunning portrayal of King Henry was powerfully delivered. Out of all the lines in the play, those of Henry’s were cut the least, leaving Nick with the lion's share to remember. And it wasn’t just Nick who was exceptional – the whole cast were wonderfully professional. Behind the scenes, Mr Cadman, Ms Ashton, Miss Porter, Mr Burn and Mrs Hang-Campbell, worked tirelessly to ensure everything ran smoothly, and none of this would have been possible without the imagination and vision of Mr Millar, who yet again has raised the standard of Dr Challoner’s theatrical endeavours to a new high.