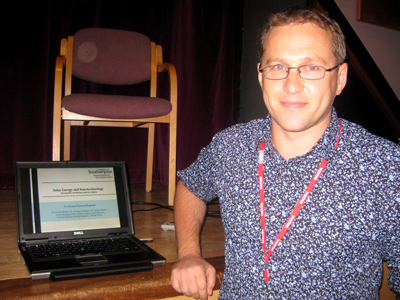 To most of us that wouldn’t mean much but to the enthusiastic sixth form physicists at Challoners it translates to ‘saving the world one atom at a time!’

Professor Darren Bagnall of Southampton University visited on Wednesday to give a lecture which revealed how nanotechnology may help to solve the challenges of global warming and climate change. Professor Bagnall and his team are studying and attempting to emulate the optical properties of moths’ eyes and butterflies’ wings in the search for ever more efficient and lower cost solar energy. Using state-of-the-art facilities, arguably the best in Europe, even undergraduates are carrying out research that is helping to change the world.

The sixth form students were fascinated to learn about this research and the huge resources that lie behind it – maybe some of them will be a part of it in just two or three years time.