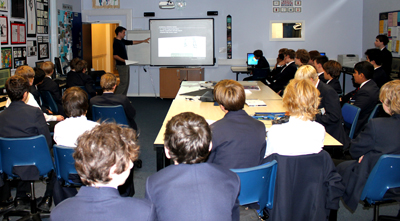 The Year 9 lunchtime Graphics Club got off to a wonderful start with a visit from Michael Jones, a former pupil, who called in to discuss how his career in the graphics world had taken off since leaving Bournemouth University.He explained the variety of jobs available within the industry such as animators, modelists,matte painters and gave a brief description of each role.The students heard how working in a small company would give them the opportunity to use many skills but that larger companies would need more specilised workers due to the many staff they employ.

Michael gave good advice about checking out computer graphic websites to deepen their understanding and suggested they did work in their own time to ensure that their show reel presented a broad spectrum of their abilities.He encouraged them to be creative and develop their core skills as many companies are willing to teach specialised software to students who display talent.

Michael is now leaving for New Zealand where he is taking up the post of Software Designer at Weta Workshop, a special effects and prop company made famous when they produced the sets, costumes, armour, weapons, creatures and miniatures for Peter Jackson’s film trilogy The Lord of The Rings.