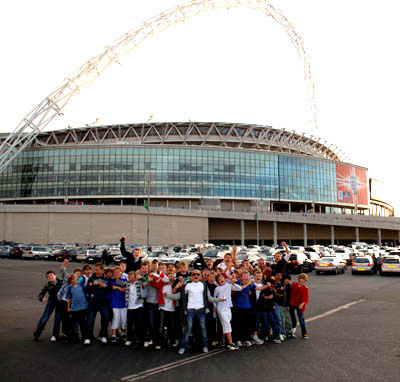 Forty lucky Year 8 students got the opportunity to go to Wembley Stadium on Wednesday September 9th, with the Sport and PE team, to see the World Cup qualifier between England and Croatia. The tickets were part of the school’s ballot with the FA, and for the first time the school was successful in being awarded tickets. It was the perfect match for many of the group to be making their first visit to the impressive new Wembley.

Goals from Frank Lampard, Steven Gerrard and Wayne Rooney provided an exciting match and qualification for the World Cup in 2010. England proved they can play under pressure as they secured a place in South Africa next year.

This was the encouragement the Year 8’s needed as Hendrik van der Bout and Robbie Murphy both scored hat tricks in their match in the first round of the County Cup that followed this visit. Hopefully they will continue to be inspired in their other matches this season.