Cricketers triumph in the Caribbean 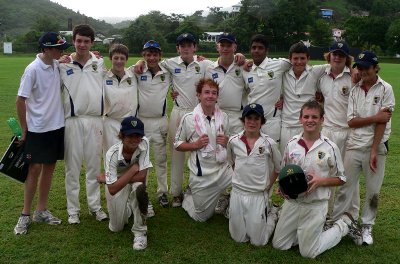 The school cricket tour to Grenada in July was a great success and saw the boys winning 11 out of the 14 games against local opposition. The U15 side won six games – including a tie with the Grenada Academy side at the National Stadium - with one rained off while the U14s won five and lost two. George Shiel was the leading wicket taker on tour, while Alex Morgan topped the run scoring table.

On one of the ‘rest’ days, some of the boys went for a hike in the rainforest while the rest headed to the Grenada Golf Club for a round on the challenging course. In the afternoon, the U15s swapped their cricket whites for the white ‘England’ football strip and took on the local football academy in a game at the national football stadium. Watching the two teams warm up, most informed pundits would have placed their bets on the local side. However, an early strike by Charlie Young set the Challoner’s bandwagon rolling and the tourists secured an impressive if improbable 5-2 victory thanks to further goals from Henry White, Jack Pounce, Tom Fouhy and George Kingston.

With the cricket completed, the tired but very happy touring party spent the last day on a fantastic catamaran cruise around the south coast of Grenada, followed by a wonderful end of tour dinner at The Aquarium restaurant. The boys entered brilliantly into the spirit of the tour and rose to the challenge of shopping and cooking for themselves. The Masterchef competition proved a highlight as ever, with James Hamilton, Ollie Kinsey, Craig Baillie and Andy Merrison emerging as worthy winners. Above all, the tour was an extremely happy one during which the boys and staff hugely enjoyed sharing the amazing experience of touring the Caribbean together.