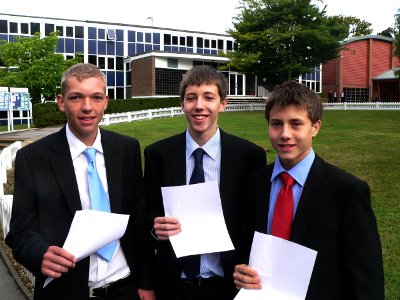 Challoner’s students receiving their A Level results celebrated a record year with over 80 per cent of grades being As and Bs. The pass rate was 99.3 per cent. Six students – Jamie Bridges, Stefan Kopieczek, Tom Perman, Daniel Talbot, Niall Coghlan and Vishaal Gadhia – attained six A grades while a further 15 scooped five As. Headmaster Dr Mark Fenton said: “Many of the university courses our boys apply for are extremely competitive, often demanding three As. In a year in which getting onto some courses will be tougher than ever before, we are delighted that so many of our boys will be able to go to their first choice of university. We are very proud of our students' fine achievements this year.” Matt Herman, 17, is going to Oxford University to study History after getting five As and said: “I was really nervous last night but I'm just really pleased.” Priyankumar Patel got five As and one B to study at the London School of Economics. He said: “It's been the best years of my life at this school so I'll be really sad to leave. It will be really hard to sever ties.”

Boys in Year 11 were equally pleased with their GCSE results when they opened their envelopes a week later. A total of 100 per cent of the year group of 187 achieved at least five A* to C grades, including core subjects Maths and English. A lucky 56 students achieved a clean sweep of A* and A grades in all their GCSEs. Three students – Kabir Babber, of Little Chalfont, Thomas Cunningham of Gerrards Cross, and Timothy Davies of Great Missenden, scooped thirteen A* grades each. 16-year-old Kabir said: "It's great. The month of exams and the hard work put in paid off. It was a bit of a shock – you don't expect 13 A*s. I couldn't have hoped for better. I am definitely coming back to sixth form. The school's reputation and results are proven to be good and I enjoy it here." Charlie Coles, 16, of Chorleywood, said he was 'delighted' after he saw his seven A*s and three As. He said: "I was really nervous and couldn't believe they were so good ".

Headmaster Dr Mark Fenton said: "This is another truly outstanding set of results – this year group deserves great credit for matching the record results achieved last year. In one respect, the boys have gone one better this year in that a remarkable 77 per cent of the grades they achieved were A* or A – a new record. Results like this do not happen by chance. A great deal of effort is put in by the students, along with a huge input of inspiration and encouragement from their teachers – with the occasional bit of cajoling which teenagers often need to achieve their best. All the staff here at Challoner's, as well as the parents, will be rightly proud of the boys' achievements."