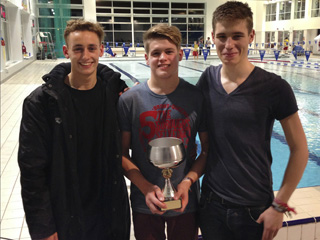 This week saw the Challoner’s Swimming team take to the pool for the first time this year to compete in the Regional Swimming Gala in Watford.

With DCGS swimmers competing in the freestyle and medley races, the Junior Team, consisting of Jamie Aldred, Will Scott, Barnaby Bloom and Peter Hughes, came up against some tough competition in their events. Despite the skill and effort contributed from all the team, they came short of a win, achieving a commendable 6th place in the two events.

The Intermediate team of Tom Strudwick, Hugo Bellamy, Ben Shepherd and Fraser Brydon, performed superbly to win their freestyle event and take 3rd place in the medley. The Senior team however, were able to give an even more impressive display. The team of Max Elphick, Charlie Messenger, Ben Levart and George Marsh dominated the medley event, setting a new regional record and taking a thoroughly deserved 1st place as well as finishing in an excellent 2nd place in the freestyle competition.

It has been a promising start to the year for the whole team, and they are now awaiting news of whether they have a confirmed place in the National Finals. Well done to all the boys involved and good luck to both the Intermediate and Senior teams in qualifying for the National Competition, which will take place later on in the year.