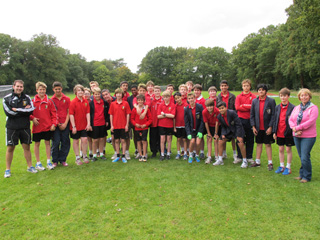 On Friday 18th October, 9 Newman set out on a fundraising drive for Jamie's Fund, and saw incredible generosity from all of the Challoner's boys. Jamie’s Fund has been set up for a fellow classmate to 9 Newman, who has been diagnosed with brain cancer. The ambitious idea to be sponsored for running and cycling 300 miles as a class was set and preparations were started. Posters went up around school, friends and relatives were contacted and charity buckets bought. Krispy Kreme doughnuts were also brought, to sell to hoards of hungry schoolboys at lunch.

Several boys in 9 Newman brought their bikes into school, determined to rack up the miles. After their first lesson, they and their form tutor, Mr Bolton, walked out to the field and started the mile circuit. Lots of teachers and sixth formers gave up their free period to help supervise, and in some cases join in the run. Meanwhile a queue was building on the playground, ready for the doughnut sale. When they arrived, dozens of boys cascaded through the gates and bought their doughnuts. The doughnuts went quite quickly! Everyone was extremely generous and gave all their spare change to Jamie’s Fund. The doughnut sale alone raised roughly £750.

9 Newman ran 140 miles over their target of 300 miles. This was more than anyone could have imagined: everyone had tried their absolute best and had challenged themselves to their limits. Hopefully 9 Newman’s hard work will notably boost the money that Jamie’s Fund has raised so far and we will be ever closer to that huge amount of money needed.

As well as all this, the school's annual quiz night also targeted Jamie's Fund this year. The event, organised by the Friends, was catered for and supported by Jamie’s classmates and their parents - along with a number of other generous supporters. With a record turnout of more than 200 people, an incredible £6000 was raised on the night. As well as the food (and of course the questions!) there was also a silent auction and a raffle which all added more money to go to Jamie’s Fund. About 10 boys from 9 Newman turned up to help out with the marking of the quiz and with preparing and serving the food. The evening was thoroughly enjoyed by all who came and thanks go to the Mr Atkinson, Mr Burn, the Friends and the 9 Newman boys and their parents who all contributed to make the evening a success.

Jamie's Fund is moving steadily along the way to raising the money it needs for Jamie's treatment - but there is still a long way to go. If you wish to contribute, you can do so here: http://www.justgiving.com/jamiesfund.