Football and Rugby this Season 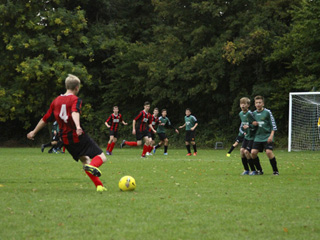 The senior rugby sides have enjoyed a successful start to their season with the 1st XV winning four of their six opening games. A strong 39-7 win on their first game against Burnham kicked off a good run of form with victories against John Hampden, Sir William Borlase and a second triumph over Burnham Grammar school. The 2nd XV team's game versus Forest School was another resounding victory in which Challoners won the game 28-7, scoring four tries.

However, Challoners form took a hit against Cathedral school. A valiant team effort was not enough to hold off the physical side from Queensland in Australia in a challenging game where Challoners ended up the losing team.

In their most recent game the 1st XV showed a strong team performance against Reading, with Jake Cutter scoring two tries, bringing his tally to seven so far this season. Challoners narrowly missed out on a victory though, as they conceded a try in the closing stages of the game. The team now look to continue their good season heading into the winter months.

The Sixth Form football season kicked off to two great victories against Denbigh with both the 1st XI and 2nd XI team winning by considerable margins, 6-0 and 6-1 respectively. The 1st teams second game of the school year was against a strong St. Clement Danes side. Two goals from Joe Inch and one from Ollie Penton meant that the full time score was a deserved 3-1 win to Challoners.

In the following three games the 1st XI won 4-0, 4-2 and 4-0, bringing their record to five wins out of five, with Joe Inch taking a hat-trick along the way. Unfortunately Challoners' winning streak was brought to an end with a 4-0 defeat at the hands of Hampton – but, despite this, the team bounced back quickly winning against rivals John Hampden 3-1. This placed a Challoners at the top of their Bucks Cup group. The 2nd XI also put in a commanding performance against John Hampden Grammar School, winning 5-0.

After the initial stages of the season Challoners 1st XI hold a win record of seven games in eight as the squad look to reach the latter stages of the Bucks Cup.

Tough early season fixtures for our junior rugby teams have been reflected by a range of results and score lines. Year 8 started well, beating Lincroft 52-0 in the cup before defeating Watford Grammar with an even more impressive 61-0; the whole team pitching in with tries. Year 9 were unfortunate to lose 10-5 against Haberdashers’ Aske, while Year 11 haven’t had much luck at all this season – losing against Forest, Habs and Watford Grammar.

One particular highlight for the Year 11s, however, was seeing Tobin Harden called up to the first XV and making an excellent debut. Year 10 convincingly beat Burnham Grammar, with Joe Tunney scoring an extraordinary six tries, before unfortunately losing against Haberdashers’ due to a last minute penalty. A loss against Sir William Borlase in the Daily Mail Cup means that the team now drop into the Vase, where they will be hoping to progress in the competition.

It has been a busy start to the season for the Challoners junior football teams. First up for all of the teams was the customary early-season fixture against local rivals John Hampden in which Challoners were unbeaten across all years.

This early season form continued, with Year 9 recording an impressive 6-1 away win at St Clement Danes. Years 7 and 8 took on the same opposition, with Year 8 playing their part in a thrilling 4-4 draw, and Year 7 winning comprehensively 6-3. Both Year 8 and 9 were unlucky to be knocked out of the National Cup in the first round against strong opposition, whilst Years 9 and 7, recorded good wins in their first Bucks Cup matches.

As the season progressed, Year 8 and 9 both recorded commanding wins against Hampton, with both results emphatic 6-0 victories. The Year 7’s then played a rollercoaster of a match against Dame Alice Owen’s, as the boys managed to come back from 2-0 down to lead 6-3, only to cruelly lose 7-6 late on.

Year 8 team earned two more wins, first against Berkhamsted and then against Sir William Ramsay in the Bucks Cup. Year 7 also beat Berkhamsted before beating Charters School 3-1 in the National Cup. The Year 10’s were unable to follow suit however, and were knocked out of the National Cup after extra time.

Overall it has been a good start for the junior football teams, with good performances from all years as they look to record more wins and progress in the cup competitions.