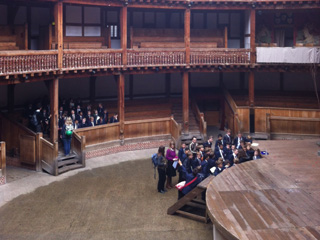 Year Eight’s Enrichment Day took them to them to The Globe Theatre to learn all about William Shakespeare and his works, which proved to be a very informative and entertaining day; even the coach journey acted as a ‘famous landmarks bus tour’ as it passed Big Ben, Tower Bridge, the Shard and the London Eye. Upon arrival, the group went straight inside and started finding the answers to the questions on their booklets. Then, after that, lunch was served in a square where, as always, there were pigeons - lots and lots of pigeons. After lunch came a tour of the auditorium itself, and a guide told all there was to tell about the great theatre. According to the guide, there always used to be the crowd of poor people standing in the Stalls and only the rich people seated around the edge in the Circles. Finally, he took the group to the basement where all participated in a bit of impromptu drama, based on the play ‘The Tempest’. This saw the end of a very interesting trip, and a very interesting Enrichment Day.

The Year 9s stayed on site for their enrichment as for the boys of Year 9, the day brought a crash course crammed with chemistry where experts came to school to feed the eager minds with facts galore over a wide range of chemistry-related topics, ranging from dangerous dust to bioluminescence. With groups for the day already planned, forms were all mixed up as they heard from chemistry masterminds. The day finished in style as two chemists, Andrew Thompson and Dr Wendy Pitt, arrived to deliver a talk about chemical bonds. Between amusing jokes and learning, there were lots of experiments with the day finishing with a bang, sometimes quite literally!

The Year 10s took a trip to Thorpe Park looking at the physics and the biology of rides. The day started off with a lecture from a member of staff who explained some of the basic physics of the rides, as well as the calculations for acceleration on the park’s fastest ride, Stealth. He also explained that the difference between a roller coaster and a launch coaster is that a launch coater moves from a launch at the beginning which gives it enough energy to complete its track. These huge amounts of power are usually generated by massive amounts of pressurised gas releasing and pulling a chain. Roller coasters however rely on being pulled up hill by a chain then letting gravity do the rest of the work. Other topics included looking at positive and negative G-Force and the effects they have on your body, which was of course very fascinating! After the talk, the year 10s were free to roam around the park and everyone (teachers included) could fulfil their thrill-seeking fix, especially as they could take full advantage of the short queues!

For Year 11, the day was looking to be packed with information and fun activities. Entitled ‘Moving on’, the day was centred around what they will go on to achieve after their GCSEs; information about the world of work, sixth form and colleges, work experience, and university degrees to name but a few. Throughout the day, several teachers relayed personal stories of work experience and university life. Of course all the boys enjoyed this informative event as well as the opportunity to get up from their seats for a game of handball. The game is a cross between netball, basketball and football. It broke up the day and also inspired some to campaign for handball in future Games lessons!

As the new young men of Year 12 embark on two challenging years of A-Levels, the school helped ensure that the students begin with the correct learning approach required to excel in studies. The Sixth-Formers enjoyed a day led by Mr Cavanagh and Mr Sturgeon advising useful learning techniques that will not only prove beneficial throughout A-Level but will impress future employers, such as the method of ‘questioning’. Students were intrigued to discover that Nobel Peace Prize Winner, Isidor Isaac Rabi, attributed his success to the wisdom his mother imparted, stating 'My mother would say, "did you ask a good question today?" That difference — asking good questions — made me become a scientist.'

Ms Ashton kicked off the day by naming and shaming a few, by telling everyone the mishaps that they’ve already had on the road, notably mounting the curb in a test. This was just the beginning for what would become an extremely informative day about driving. Split into two groups, everybody in the year got the opportunity to listen to a driving safety presentation; to watch a demonstration on car maintenance from two mechanics employed by Volkswagen; and to listen to Dr Thompson and Mr Colquhoun informing them about what to look for when buying a car. The Year 13s were also given pointers on how to pass the scourge that is the theory test (although Ms Ashton insists it is better than the previous convention of not having one at all). On top of what already seems to be a jam-packed day, Dr Richards talked of the merits of motorcycles, and he certainly swayed some of the students to consider it when he said 'from the traffic lights, I had crossed the junction before that van had even started moving!' Enrichment days are always looked forward to at Challoner’s, and once again the school has hit the mark with their choice of a driving Enrichment Day. Special thanks to Ms Ashton.