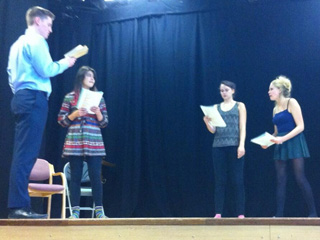 The time of year has returned once more where the great spectacle, the senior play, will grace our stage - which will undoubtedly bring great anticipation and excitement. This year’s choice, As You Like It, is a pastoral comedy by William Shakespeare which follows the young love-struck Orlando who has fled his horrible and neglectful life for a life in the forest, where he meets the witty heroine Rosalind, who has been banished by the evil Duchess who has banished her father. With frivolous, ridiculous flares of comedy and plenty of cross-dressing, this absurd play will provide laughter and enjoyment for a widely-ranged audience.

Following the success of A Streetcar Named Desire by Tennessee Williams last year, Ruby Morris has taken up the role of Rosalind and is sure to meet and exceed expectations once more. Differently to last year, this year is not fully student led; however Mr. Flower (Director) has appointed Laurence Hodgson (who played Stanley last year) and Rob Hough as his assistants. Along with Ed Armstrong as the producer, it is certain that amongst crew and cast, this years performance will fill the room with hysterical laughter as the cast showcase their hard work and talent.

Performances will begin at 7:30pm on Tuesday 26th November until Friday 29th November.