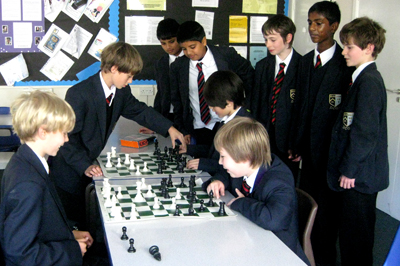 Chess club has begun anew with some 20 students currently involved, embracing the 1500 year old strategy game that is chess. Every Friday after school students of all skill levels come to chess club to play amongst themselves.

The club currently has a professional coach mentoring those students wishing to develop their chess skills although there are others who just want to drop by for a casual game of chess! As the year progresses the DCGS Chess Club will be forming a team which will be entered into two chess tournaments involving many other schools in the area. As well as the out of the school tournaments there will be an in-house chess league, with pupils competing to ascend to the top of the DCGS ladder.

Everyone is welcome and details about the club can be found in the Student Development Office-simply pick up a registration form, return the permission slip and join in!