Tales from the Tower 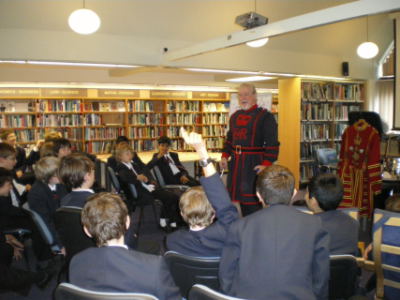 The students were enthralled by stories of The Tower of London when Mick Casson, retired Yeoman, visited the Library Information Centre last Wednesday lunchtime.

Nursery rhymes were the main theme of the day as Mick explained that most had roots in historical events such as Three Blind Mice which depicts three bishops, supporters of Lady Jane Gray, who lost their heads when Mary Queen of Scots succeeded the throne. They learnt about several rhymes and had fun guessing the timeline of each one.

This was Mick’s second visit so he spent more time speaking to the students about The Tower’s gory history and who/where prisoners were held during their imprisonment which the boys were keen to explore! They learnt the difference between the uniform of a Tower Yeoman and that of a Yeoman of the Guard and were enthusiastic to hear about the variety of weapons used. It was a highly interesting lunchtime with both Mr Casson and the students asking when the next event will be so watch this space for the next Tower update!