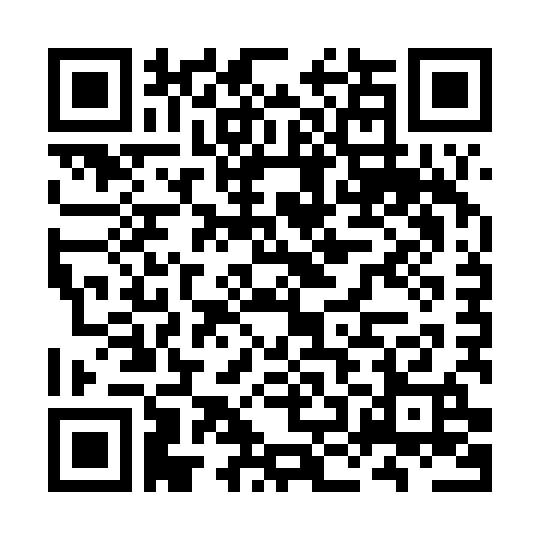 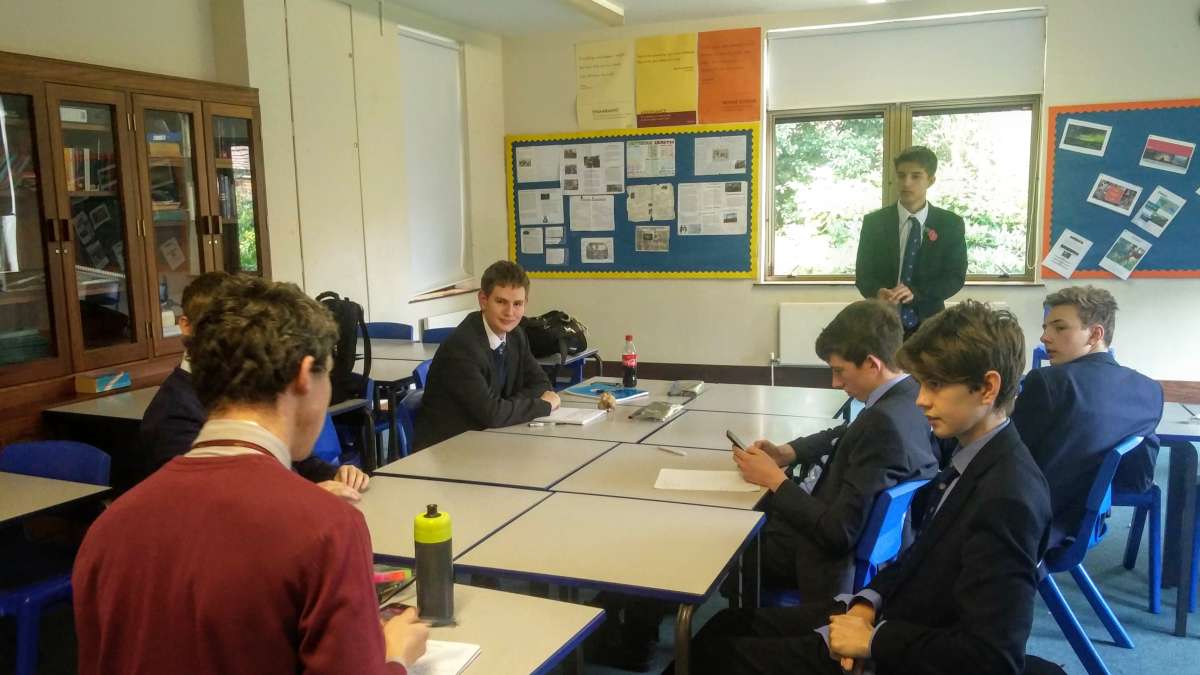 After the half term break for teams to talk tactics, complete strict training regimes, and even have a chat with Challoner's debating legends Dan Chapman and Dom Storey, it was finally time to see which teams had used the break best. Many Sixth Form debators had been on the Washington trip, seeing debating in the House of Representatives at the US Congress, however I heard that the standard was much lower than at Challoner's. The debate deliberated by the daring duos was 'This House Would Permit Euthanasia'.

The debating resumed on the very first day of term, with Matt Cooke and James Wroe taking on Kieran Bozier and Robbie Sleet, Oliver Hardman and Jeyoung Ryou and the lone ranger Tom Fleetwood-Law, battling it out alone whilst still looking for the right partner. The opening to this debate was solid, with Matt and James bouncing nicely off Oliver and Jeyoung - a true advert for the sport. However in the midst of the debate, mistakes were being made that would come back to bite. Jeyoung failed to properly define the motion whilst Matt 'Captain' Cooke spent too long on an anecdote. The doctor's 'Hippocratic Oath' was a key topic of discussion in this debate - is our health service's job to keep people alive, or to reduce pain? Robbie and Kieran brought some nice points to the latter half of the debate, suggesting pensioners could feel like a burden to their family and be tempted to get help to end their life. The debate ended with School Captain Oliver completing the now expected double duty, filling in as Tom's second speaker just so the debate could be completed. Despite his arguments being top notch, Tom came last as without a proper second speaker, it is a difficult task to finish in the top three. The top three for this debate were extremely close, but Robbie and Kieran edged it, coming just ahead of Matt and James.

N2's Thursday fixture saw yet another pair without a member, with Kit Haworth lacking partner Barney. He faced league leaders Matt Dagnall and Tom Franks, Gianluca Abbate and Harry Franks, and Joe and Adam (also known as The Postmen because they always deliver). As is becoming somewhat of a theme in debates featuring the current leaders and The Postmen, etiquette was thrown out the window, as both teams demonstrated a true passion for their side of the debate at the expense of formality. Joe (in favour of euthanasia) claimed that euthanasia should be permitted as it is legal to put down pets. This point was clearly rebutted in a point of information and Tom went on to speak eloquently on why such a motion is ridiculous. A set of strong speeches from Adam and Matt in the middle of the debate meant this match was neck and neck going into the second half. Kit rebutted Matt's points well in a solid intellectual speech, saying that for many there wasn't a light at the end of the tunnel. The debate reached fever pitch during Harry's speech as opinions boiled over, meaning Harry had to receive extra time to put forward his points. When it came to the summary speeches, Kit spoke once again for the proposition and made a decent stab at his first summary speech, showing good skills. Gianluca's summary speech failed to summarise the debate, unsurprising given that stick cricket seemed to be more important to him than listening to any arguments to summarise. Judge Mike Dean concluded that Adam and Joe won as apparently their arguements weren't rebutted by Tom and Matt, who finished a dissapointing second place. Kit finished third - impressive given he was alone. 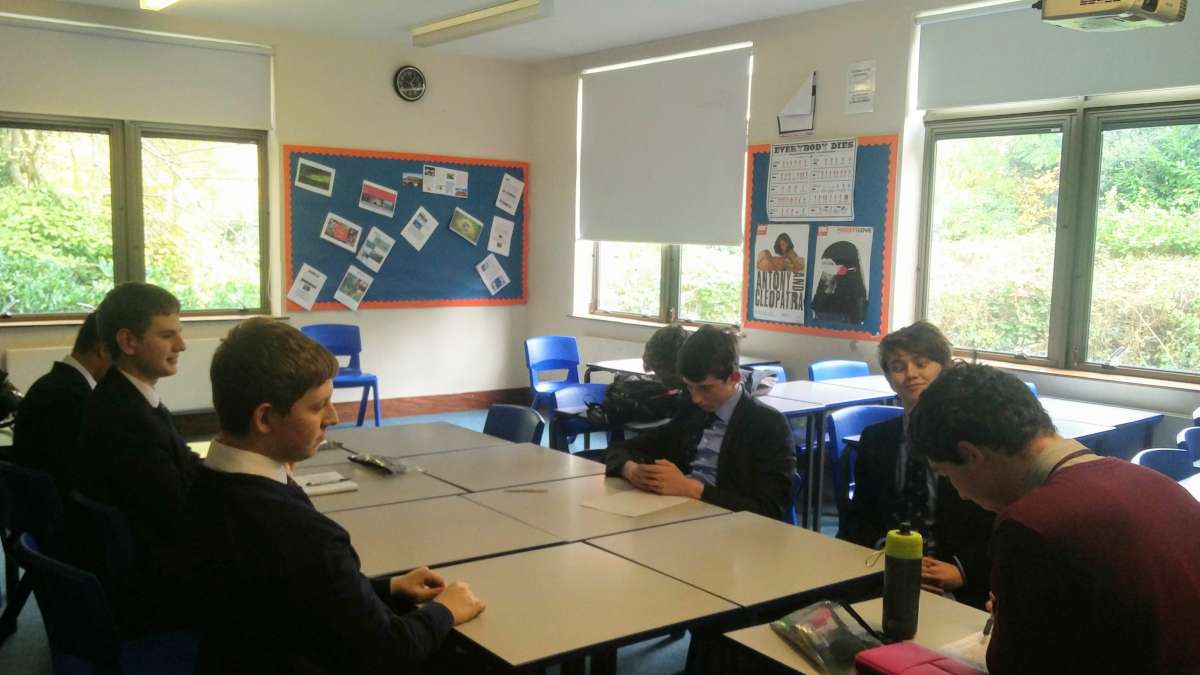 With Redford Denson and Chris Heighes looking to capitalise on their game, they faced Soorya Thavaraj and Dan Cox who are yet to hit top gear, Max Halton and Jamie Payne who were struggling somewhat, and Aran Mohan and Sam 'Slane' Lane. This debate saw similar arguments raised as in the previous debates, especially the notion of free will. Should patients have the freedom to end their own life, or should they have to live? Soorya's summary speech was the best in the debate according to judge Mo Karim, with Jamie and Max also speaking well. Whist their oration wasn't yet at a top level, their points were clear, concise and relevant to the debate. Slane and Aran also had one of their best debates, with Challoner's longest serving debater Slane rolling back the years with a performance reminiscent of his Year 10 glory days. Meanwhile there was some controversy over Redford and Chris' performance. It was hotly contested among those involved as to whether the dark horses to win the whole thing adequately summarised the debate and actually brought in anything new. Mo decided that they didn't, and they were placed last - after all, debating is about opinions. Soorya and Dan finally performed to their full potential, snatching first place with Max and Jamie claiming second and Slane and Aran for the first time getting a result other than last.

After another great week of debating, it's time to take a look at the state of the table. Matt and Tom are still lead, but their string of first place results is gone, with a second places in the last few weeks allowing for the Postmen and Soorya and Dan to close the gap on them. The mid-table looks very crowded, with eight teams in the space of four points, meaning there are around ten teams still in contention to win - anything could happen. However, the three pairs at the lower end of the table have plenty of time to catch up. Check back here next week for more updates.