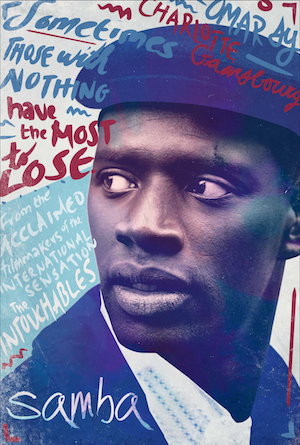 With regards to culture, it is a notion almost universally accepted that 'France' is synonymous with 'cinema'. Though the country can boast significant contributions to all of literature, music and art throughout history, their collective ability to explore the depths of the silver screen have captured and amazed generations upon generations worldwide. As tribute to this extensive and impressive history, the French Team at DCGS have collaborated with their counterpart at Challoner's High to set up the French Film Club, which opened this Wednesday to an audience of 30 teachers, parents and Sixth Form students with a screening of the 2014 comedy-drama Samba.

Having started to build himself a name in modern cinema, it seems ironic, or perhaps appropriate, that César award-winning actor Omar Sy would choose play an immigrant whose name is always changing; though his role in the film only acts as a further testament to his outstanding ability to captivate an audience and carry forward an emotive cinematic narrative. Following a visit to Hollywood with roles in X-Men: Days of Future Past and Jurassic World – a trend which looks to continue in the future – Sy returned to France in 2014 to reunite with directors Olivier Nakache and Eric Toledano for the team's collaborative follow-up to the award-winning Untouchable (which also happens to be the current highest worldwide-grossing non-English film of all time) to display the touching and often-hilarious relationship between the eponymous Senegalese immigrant and insomniac immigration officer Alice, played by the ever-talented Charlotte Gainsbourg. As fate draws seems insistent to draw the characters’ lives together, as well as those of a large supporting cast, the film centres of people helping each other overcome the struggle they each have in their dead-end lives.