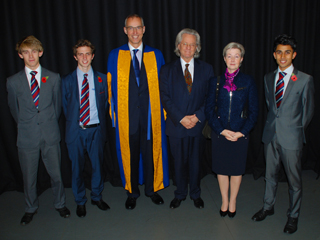 For every Dr Challoner’s student, Senior Prizegiving is the anticipated moment where a year of hard and dedicated work is deservingly applauded by a crammed hall of proud parents and fellow peers. This year’s celebration was ever more so privileged as congratulations for the students collecting GCSE certificates and achievement prizes was accompanied by the renowned and distinguished Professor Grayling.

Professor AC Grayling, the chief guest for Prizegiving, was introduced to the intrigued audience as a leading philosopher, Master of the New College of the Humanities (an independent university which he founded in 2011), a frequent writer of supplements for the Times and Guardian, and a representative to the UN Human Rights Council for the International Humanist and Ethical Union.

Then, the packed hall eagerly listened as an enthralling address on education and the hidden prizes of our lives commenced. In this Professor Grayling stressed the importance of exhibiting and integrating skills such as being judicious, acquired from a learned education, into our lives. Also, the persistent exploration for 'hidden prizes', including friendship, was emphasised as essential in achieving an enjoyable life. A remarkable speech by a remarkable man.

Moreover, the event was dominated by the appreciation of another successful year in Dr Challoner's Grammar School. The evening began with reports on the previous year from the two school deputies, Hershil Patel and Henry Bugg, who spoke of adventurous trips abroad to discover Iceland, daring foreign exchanges and the variety of sporting successes, particularly in swimming, where the school reached the national finals. Afterwards Dr Fenton reported on highlights of the year; the greatest being the completion of the new Sixth Form centre bringing about the school’s first ever royal visit from the Earl of Wessex.

Above all, the celebration of the student’s achievements reminded us of Dr Challoners’ school motto: 'Excellence with Integrity'.