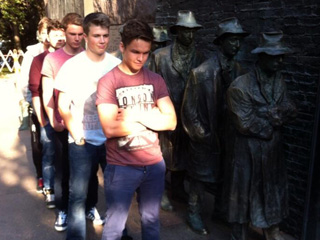 This half term a group of 50 students set out to Washington D.C. This first day saw a trip to Ford’s theatre, the place of Lincoln’s assassination. A marvellous talk later, detailing the alleged curse of Ford’s theatre - in that it has burnt down twice - and afterwards we visited the great memorials of Washington. It is hard to say which the most notable of these was, but particularly powerful were the Martin Luther King Jr memorial, and the omnipotence of the Lincoln memorial. It was a long first day, during which we were indoctrinated by the tour guides into American culture, and left emotionally drained by '12 Years A Slave'.

On day two of our visit to Washington, we went to the Capitol building. It is a vast building with colossal architecture that pays homage to ancient civilizations. We took a tour throughout the building, our band of brothers entranced by the artwork and the decoration. We then had the unique opportunity to go into the House of Representatives, and while there may not have been a debate on, just being there gave a sense of awe. Next, we went to the Library of Congress, where we were informed that they archive our tweets, much to the expectations of our squadron. On top of this, we found out that we were in the largest library in the world. Later, we went on a tour of the entirety of the Capitol, from the Supreme Court to the White House. A flawless tour, it gave us a very interesting insight into the Capitol, and allowed us to see the longest protest in US history taking place. The protest by the affectionately dubbed 'Conchita' is against nuclear warfare, and has been taking place since 1981.

On the third day, we made our way to Gettysburg, courtesy of Wayne the bus driver, who provided us with riveting information to keep us historically stimulated. Once we dismounted the bus, we went to the wax museum, where we were treated to an 'accurate representation' of the Gettysburg battle. After this, we were taken on a fascinating tour of the battlefield. Considering all the information we learned in regards to the weaponry and tactics used, many of us lamented the absence of Ed Armstrong, as we knew he would have loved that section of the tour. Once we had regained our composure, we were convinced into believing that General Sickles, politician of the North, was without a doubt the most foolish man to lead an army, as he singlehandedly orchestrated the military disaster that was the first day of Gettysburg for the North. But the North came out victorious, and so we did not dwell on his recklessness for too long. We then were obliged to go back to the hotel, much to our chagrin, in order to get psyched for the Hard Rock Café. The Café gave us a unique experience of American enthusiasm, with great service and great food, rounding off a wonderful day.

On the final day, we went to Mount Vernon estate. This offered us an insight into the life and times of George Washington. Notable was the exhilarating film we watched about the revolutionary war. We really got a sense of American patriotism.

All that is left to say is thank you to all the staff who gave up their time for the visit: Dr Fenton, Mrs Renyard, Mr Cavanagh, Mrs Barrett-Klikis and Mr Buchanan, who tolerated us admirably for the week. We all had a wonderful time.