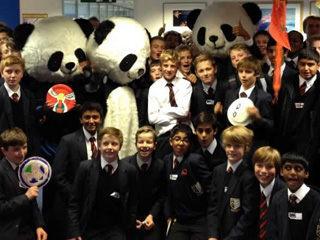 On the 7th November, Mrs Massey took 50 students from 8 Thorne and 8 Holman to visit the Heathrow Learning Centre run by British Airways, to celebrate the launch of a new air route to Chengdu. Chengdu is one of the biggest and most important cities in western China.

Our first Chinese experience was a taster session of Mandarin. In half an hour we covered greetings, numbers, months, times and countries. As you can imagine it was very hard to pick up! We then moved to a teahouse, which is where people in Chengdu chat, gossip and play games. We were served Jasmine tea and we all played Chinese Checkers.

The final activity before lunch was a simulated flight. A very good model of the inside of a plane had been constructed and our group dressed up and read out announcements on the tannoy. BA provided us with lychee juice and prawn crackers, which were nice.

We then learnt about Pandas and why they are becoming extinct. Chengdu has 90% of the world’s pandas in captivity, safely homed in their breeding centre.

The penultimate activity was an interesting question and answer session with a pilot and an air hostess who had both been on the inaugural flight to Chengdu. The final workshop was to create our own face-changing masks. In China this is a big thing, especially in the opera where the performer would remove masks of their face at baffling speeds.

Overall the day provided us with an excellent insight into Chinese language, food and culture. I now know a lot more facts about China (including that in some extremely polluted areas it snows black snow... imagine that!)