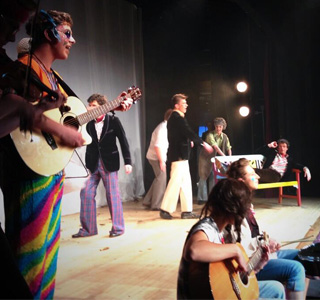 This year’s senior play of As You Like It, by William Shakespeare, told the hilarious story of a young woman who falls in love with a 'gallant youth' and naturally escapes from the tyrant Duchess Frederique to the Forest of Arden where she meets her love, and manages to get him to woo her in her disguise as a man. Bewildering, I know! In the forest, after much silliness and rather odd circumstances, eight people become four couples in a quadruple wedding, followed by merriment and music.

With an amazing cast, including Tim Leach (as seen on TV in the Bafta nominated BBC series The Trip) as our leading man Orlando, and the fabulous Ruby Morris, who played Blanche in last year’s senior play A Streetcar Named Desire, as our leading lady Rosalind - or Ganymede, depending on whether she’s dressed as a man or not - this year promised to be a fantastic show of entertainment, and entertain it did; receiving praise such as 'Better than Royal Shakespeare Company’s version' from Mrs Adi, and 'One of the most entertaining senior plays I’ve seen', from Dr Fenton and Mrs Horrocks, who of course couldn’t miss out!

This year, the senior play was directed by not only John Flower, but also myself (Robert Hough), Laurence Hodgson and Lucy Brassell. Being part of the directorial team was unlike any drama experience I’ve had at this school, and certainly was a fantastic experience! The show was produced by Ed Armstrong.

Thank you to all who came to support the show; we hope you enjoyed it as much as we enjoyed making it.