A Busy Week for Competitions 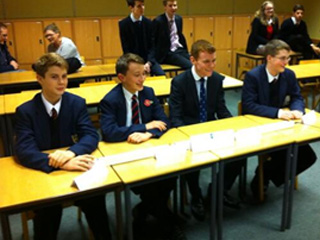 On Thursday 7th November, four Challoner’s Year 10 to 12 students set off for St. Helen’s and St. Katherine’s School in Abingdon, accompanied by Dr Fenton, for the regional round of the Senior Quiz. We competed against a number of other schools from the region. The questions were very challenging and diverse, ranging from the Latin names of predators to the titles of Sir Terry Pratchett’s Discworld series. After building a big lead, our competitor Bedford Modern, caught up and won the first match, but we managed to win our second match against the host school. The third and final match between Bedford Modern and St. Helen’s and St. Katherine’s was incredibly close, almost ending in a draw, but, in the end, Bedford Modern won by ten points. Unfortunately, we missed out on progressing to the next round, but we all enjoyed the experience and hope to return next year.

On Tuesday 12th November, two teams of Year 10 to 11 students departed for Haberdashers’ Aske’s School for Girls in Hertfordshire to take part in their annual debating competition for Year 10s and 11s. We competed against 13 other schools from London and the South East in two debates, one pre-prepared and one un-prepared motion. Prepared for the first debate, ‘This House Would Censor the Internet’, the two teams, although in different rooms, were both in support of the motion and waded into the murky waters of censorship and restriction of the internet, arguing that governments had a responsibility to stamp out illegal and dangerous material on the internet. The second, and very controversial debate given the venue, was ‘This House Would Abolish Private Schools'. Both teams argued valiantly: and ironically, in the room in which the B team were in, both schools arguing in favour were private schools and the two arguing against were both state schools!

Neither of the teams came in the top three but did well in general. Thanks to Mrs Adi for helping the two teams to prepare for the first debate and a special well done for Harrison for whom this was his first inter-school debate.