Is that Banana really a Keyboard? 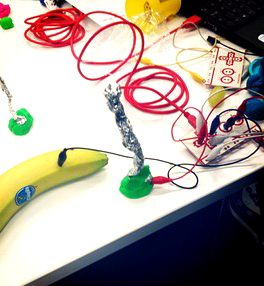 The Mozilla Festival 2012 was held over 3 days at Ravensbourne, a wired media and design campus in East London next to the 02 arena. It spans nine floors, combining creative labs with impromptu classrooms and cutting-edge technology. DCGS and Apps for Good were invited to talk about their joint Apps design programme at The Science Fair on Friday evening.

Mrs Ryde said ”There was a remarkable amount of interest in our students’ ideas, the market potential looks very promising amongst the cognoscenti. We were in august and exciting company. Makey Makey enables you to turn everyday objects into touchpads and combine them with the Internet. It’s an invention kit with a circuit board that acts as a USB keyboard but you make your own keys by alligator clipping it to objects that are at least a little bit conductive. Press the spacebar by completing a circuit when you touch a banana, your friend, or a coin. You could make a piano out of pastries, or a game controller out of play-doh. There was also a session on the next generation of Scratch. It focused on the new features of Scratch 2.0, such as: responding to movements and gestures in the physical world (similar to Microsoft Kinect), using new camera-sensing programming blocks. You could learn how to use Meemoo to choose images, turn them into animated gifs, experiment with stop motion, image filters, green screen and then use Thimble to produce an animated comic strip”

It was a really interesting evening and if anyone would like to go to the Festival next year details will be available on their website shortly.