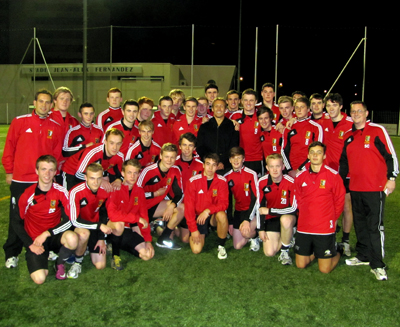 During half term 30 students and two members of staff travelled to Toulon in the south of France for the Senior Rugby Tour and with an unbeaten start to the season they were in high spirits. They played three fixtures whilst away, winning all three.

Thursday was a big highlight for everyone as the afternoon was spent watching a Top 14 game between Toulon and Stade Francais at the Stade Mayo.The students all dressed up in fancy dress which provided excellent amusement for the local fans and also the players as they walked around the pitch at the end of the game. Toulon played well and won the game.In the evening they had a training session with Tom Whitford, Toulon’s 1st XV Team Manager. Tom brought a special guest to the session, England and Lions legend Jonny Wilkinson. The students quickly got over their shock and performed very well during the two hour session. At the end Jonny spent time talking to the squad and had photographs taken with everyone. It was a great experience and one which all of the students and staff will long remember.