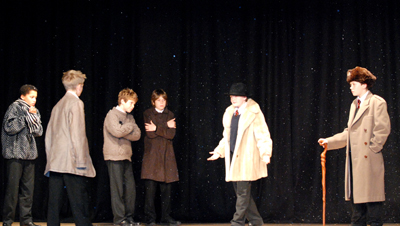 Hail Caesar! Shakespeare's Julius Caesar was the starting point for this year's House Drama Competition, in which almost a hundred students from different year groups took part. All houses were set the challenge to devise a modern opening sequence to Shakespeare's Roman tragedy, with the stipulation that the original words from the play had to be used. Early in September, House Captains recruited companies of actors from Years 7-11. Assisted by A level students of Drama and Theatre Studies, everyone worked hard to create a great range of interesting, innovative ideas on how the play could be produced. Rehearsals took place at lunchtime and the school's technical crew went to town with a really strong lighting design.

Pearson House particularly was noted for their sheer ability to muster great crowd scenes, and the strong character acting of Year 11 students Julian Ashby and Logan Miller. Thorne, directed by Year 13 student Jack Elderfield, had a really innovative take on the scene, setting the play in an oppressive school. Holman, as winners, produced work of a most impressive standard: directed by Will Kynaston and Nick Christensen, they chose to set the play in post-Revolutionary Russia, complete with authentic costume and snow blowing across the stage! There was a strong level of individual character acting, plus a great ensemble feel to their work.

Rehearsals for the Senior Play- Pygmalion- have been running for eight weeks, and the dedicated cast and crew are making final preparations for the performances later this month. Tickets can be ordered now.