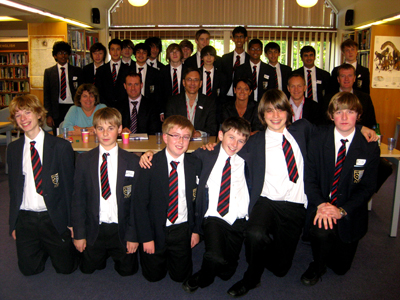 Year 10 Business students have been busy since the start of term preparing for the ‘Road to Wembley’ Coca-Cola competition, and last week saw the culmination of all their hard work. Coca-Cola Enterprises Ltd wants to work with a creative company to develop a new soft drink brand. The companies with the best ideas will be invited to Wembley Stadium to compete in their grand final. The students had to work in groups of no more than eight to create a new drink ensuring that they considered costing, packaging (needed to be environmentally friendly, practical and economical) and a branding/marketing campaign.

Once their plan was prepared, the business team thought it would be good to see whether the students could entice Dragon's to invest in their ideas. Ginny Hawkley from 4C, a High Wycombe based company who encourage local business people to give up their time to help others such as start-ups, charities and schools kindly arranged a team of five. The Dragon’s came, and after listening to the students’ very professional pitches, gave constructive criticism as well as much praise for the effort put in by each team.

Following this session, the students were fired up with enthusiasm, which will bode well as they have just heard that one of the teams has been selected to attend the Wembley final.