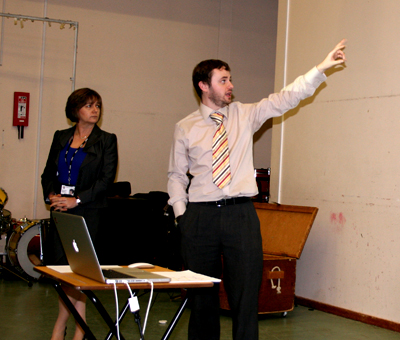 Fifty Year 10 students attended the 4th annual'Taking Maths Further'event at Aylesbury High School on Wednesday 25th November 2009.It is organised by the Further Mathematics Support Programme and is aimed at encouraging Year 10 and 11 students to study mathematics beyond GCSE.

The day was divided into three sessions, eighty minutes long, with activities designed to be accessible yet challenging,and the students attended each session in rota. Richard Lissaman from the FMSP explained the uses of mathematics in areas such as Google and video games in his sessions entitled 'Lara Croft and the Scalar Triple Product'.James Toyer from Buckingham School and Nicki Studman from The Hazeley School introduced complex numbers using graphical calculators to explore the Mandelbrot Set, while Mrs Brown (ex-DCGS) from Wycombe High School and Mr England from DCGS explained how Dijkstra's Algorithm with networks is useful in catching criminals.

Thanks to the efforts of the session leaders, the students were fully engaged throughout the day and comments such as "I didn't know what to expect, but it was great" appeared on the feedback forms. Behind the scenes, Challoner's Mrs Sealy did much of the organising to help the day run so smoothly.