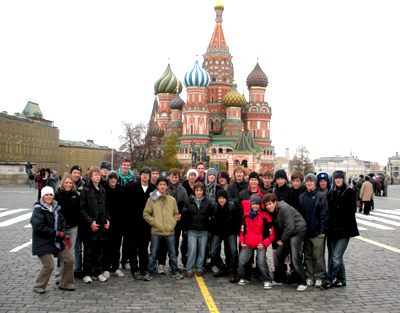 On Thursday 22nd October, 32 Challoner's sixth form History students arrived in the city of St Petersburg for a historical and cultural visit.

The group visited many of the sites of Russian history including the Winter Palace, the Peter and Paul Fortress and the Church of the Spilled Blood. Also on the itinerary was the Political History Museum which once housed Lenin's office and from where he made many of his speeches in 1917, and the remarkable monument to the 900 day siege of the city during the Second World War.

After two days' hectic sightseeing, the Challoner's group embarked on the famous overnight train journey to Moscow, arriving in the Russian capital at a somewhat unsocial hour of the morning. The traditional pilgrimage to Lenin's mausoleum in Red Square was followed by a visit to the Park of the Fallen Idols which contains many of the statues which were torn down on the fall of communism. A guided tour of the Kremlin was for many boys a highlight of the trip.