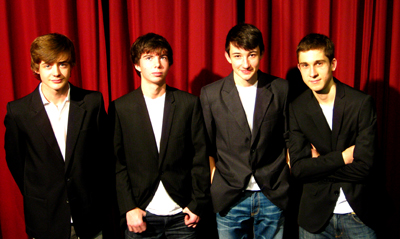 A team of Year 11 Challoner’s students is celebrating after winning a brand new Theatre Sports competition on Tuesday, 10 November. The contest, which took place at the Beaconsfield School, was hotly contested by a number of talented teams from local schools.

Theatre Sports, which is similar to the television show Whose Line is it Anyway?, is a way for actors to develop their improvisation skills through a series of games. It’s fast moving and, above all, fun with competitors given character types, scenarios and, sometimes, opening and closing lines. They are then asked to instantly devise scenes involving the characters in the situations described. Marks are given for teamwork, entertainment, comedy, performance skills and inventiveness. For the first DCGS entry, a group of Year 10s and 11s used lunchtimes over a three week period to rehearse. A team of four actors was then selected to represent the school.

The competition was tough but they won by a clear margin. The judges praised our team for their inventiveness, teamwork skills, entertainment value, maturity and sense of comedy. Two of their three rounds had the judges in hysterics! The team were coached by the English and Drama Team and is just one of the numerous opportunities for boys from across the school to be involved in extra-curricular drama. Lunchtime clubs for Years 7 to 9 are run on a weekly basis during the winter months, there’s an annual play for boys in Years 8-11 and, of course, the Senior Play, this year’s being A Midsummer Night’s Dream and running for four nights from 25 November.