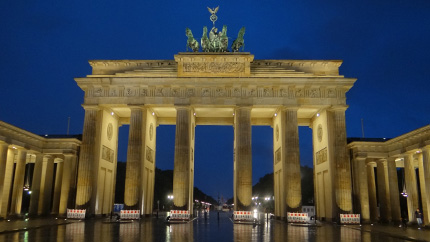 This half term, students from Year 10 were taken to Berlin by the History Team to learn more about Nazi Germany and the aftermath of the World War Two. On the first day, we enjoyed a walking tour of Berlin. We saw many famous sights such as the TV Tower and the Brandenburg Gate. We enjoyed a Greek meal for dinner before heading to the top of the Reichstag building (the German parliamentary building) to marvel at the brilliant views over the city.

On the next day we got on a coach and headed out to the Berlin Olympic stadium. This was the stadium in which the Nazi Olympics were hosted. It was also a host stadium for the 2006 World Cup. After this we headed to Potsdam, to the location of the Potsdam Conference which had decided the punishment of Nazi Germany after World War Two. This was exciting, as it was also the last palace built by the Kaisers. We then paid a visit to the SS museum to learn about the deportation of people to the concentration camps, and looked at some of the remaining segments of the Berlin Wall. That evening, we climbed to the top of the TV tower to again get beautiful night views of the city.

The next day was an emotional one as we visited Sachsenhausen concentration camp: this was one of the main camps for Berlin. We also visited the Stasi prison where people were held until they confessed - we learned that prisoners were held in single cells and would never see another person apart from guards and interrogators while they were there.

We loved the trip, with Charles Page in 10 Holman saying, 'I found it very enriching to my history GCSE.'