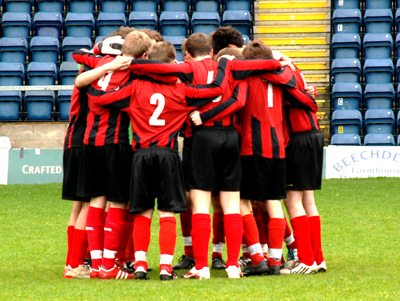 On Thursday 10th May the Year 10 football team travelled to Wycombe Wanderers FC for their County Cup final against John Hampden Grammar School. They played exceptionally well in the earlier rounds, beating Aylesbury Grammar, Ousedale and Lord Grey to secure their place in this final.

They were accompanied by several parents and peers who packed into the stadium to watch this closely contested encounter. Our team took the lead thanks to a header by Oliver Penton from a corner by Eddie Mason but John Hampden struck back mid-way through the second half to take the game into extra time. All the players began to tire on a heavy pitch and as a result the game went to penalties, with Challoner’s eventually losing 5-4. A special mention has to go to Stefan Davies for keeping the team in the game during the penalty shootout and to Eddie Mason for a man of the match performance.

All the players did Challoner's proud and gained valuable experience which will help them in the future.