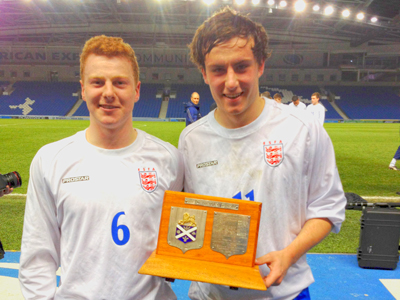 On Thursday 26th April two of our Year 13 students, Tom Fouhy and Jack Pounce, represented the English Schools FA Under 18 side in a decisive match against the Republic of Ireland at the Amex Stadium in Brighton. The match was a crucial one as the winner would be crowned champions of the Centenary Shield, which is a very prestigious competition between England, Scotland, Wales, Northern Ireland and the Republic of Ireland. Both Tom and Jack started the game and Jack had the honour of being made captain of the side.

Support for both students was great, with 68 students, staff and parents cheering their every touch from the stands. The game started well and Tom was instrumental in setting up their first goal which was followed shortly after by another putting England in a strong position. Ireland managed to pull back one goal but England hung onto their lead and secured the Centenary shield.

It was a very proud moment when Jack lifted the trophy. Well done to both students and many thanks for the amazing support from all those who went to the game.