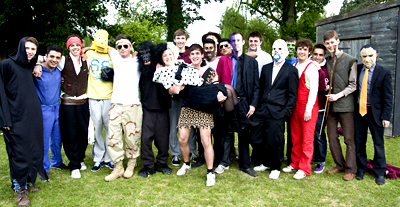 Leaving school is a rite of passage for all students and this year was no exception.

With exams looming the year 13 students marked their departure last Tuesday with a barbeque and fancy dress competition on the school field. They were joined by many members of staff who wanted to bid them farewell and the good natured event was made possible by the hard work of the canteen staff who cooked over 400 sausages and burgers to feed the masses. Each div adopted a theme for their fancy dress, and so the field was covered with children’s cartoon characters, pirates, jungle animals and a motley assortment of heroes and villains. Div 8 was triumphant, perhaps because of the efforts of Miss Ashton whose Cruella De Ville outfit from 101 Dalmatians lent glamour to the occasion. Tom Swart took the individual prize for his fantastic Two-Face costume, inspired by the Batman films.

As they leave for their exams we wish all our students the very best for those exams and for their future after Challoners.