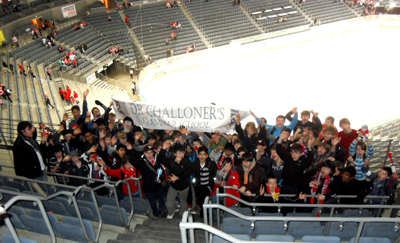 The students woke early on Saturday in time to go on a guided tour given by the local tourist board and then they had plenty of opportunity to try out their German whilst shopping in the city. Later, the whole party earned their traditional German meal in a typical Kölsch Brauhaus having ascended the 536 steps up to the top of the Cologne Cathedral, the biggest gothic church in Northern Europe which dates back to 1248. A tour of the Lindt chocolate museum and a trip to the cinema to see a 3D German film were also in the busy schedule. The highlight of the weekend was the Ice Hockey match between the Cologne Sharks and local rivals Düsseldorf Metrostars at the packed Lanxess Arena.

The group arrived back in Amersham late on Monday night, tired but elated and now the students can apply what they learnt to improve their language skills in the classroom.