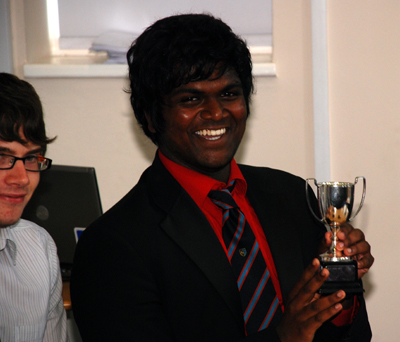 To be the winners of the Year 13 Inter-Div University Challenge was a highly sought-after prize. A contest of pride, a competition of superiority, a chance of eternal glory; the University Challenge event that took place last week saw all these superlatives for the competition being fashioned, and it all came down to which year thirteen division could produce the best team possible.

Questions had been set by the students and the ‘Paxman’ seat was superbly filled over the four days by Yaroslav Walker and Tom Tryon. The competition certainly threw up gruelling questions such as; name the Roman Emperors of the Julio-Claudian dynasty or what type of disorders does an endocrinologist treat, showing the breadth of knowledge the contestants needed to have to succeed in each round.

After hard fought quarter and semi finals, it came down to a final between the biology and electronics divs. However, this is where it turned into the Ram Sarujan show! The prospective Cambridge maths student showed an impressive extent of general knowledge which meant the electronics div became worthy champions with a massive score of 170 and were presented with the Millins Cup to mark their achievement.