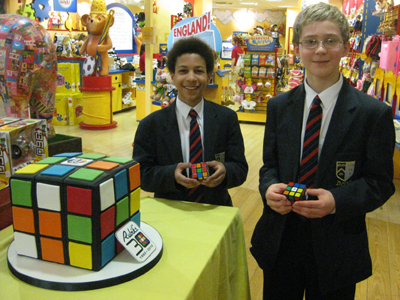 On Tuesday 25th May, Mr Burn from the Maths Department along with two year 7 students, Tristram Newman and Tom Strudwick, travelled up to London to an event at Hamleys, the famous toy shop in Regent Street.

It was the Rubik’s cube 30th anniversary celebration and our students had the opportunity to meet other world record holding speed cubers.They were also lucky enough to be interviewed not only by the BBC, but also Reuters and a crew from New Zealand.

There was a cake in the shape of a Rubik’s cube, which was a highlight for the students, and they all got to show off their cube solving skills to the general public which was very well received!