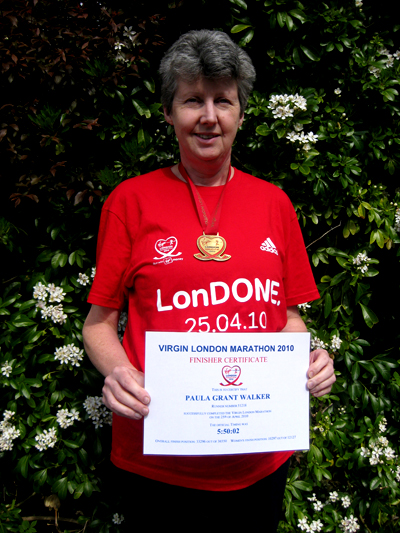 Mrs Walker, otherwise known as 'Matron',successfully completed her first marathon in a very respectable time and proudly wore her medal which was admired by all.

She says that running the Virgin London Marathon 2010 on 17th April was one of the hardest things she’s ever done as she had only started running approximately 2 years ago. During training, the furthest Mrs Walker had run was 18 miles so she wasn’t sure just how things would go on the day. The atmosphere was great and there were many highlights including rounding the bend on the South Bank and seeing the awesome sight of Tower Bridge ahead. Hours later, when Mrs Walker was closing in on Big Ben she managed to find the adrenaline to sprint to the finish line along the Mall, down Birdcage Walk, in front of Buckingham Palace.

It was an incredible experience and Mrs Walker also raised £1300 in aid of Helen and Douglas House, the children’s hospice in Oxford. When asked if she would be participating again she laughed and said, 'Never, well maybe!'