The month of March saw the continued success of four Year 12 students in the German debating arena. The team of Harry Brandon, Noami Kaplunov, Ollie Powell and Matt Levine managed to uphold their winning streak in the Goethe-Institut's competition, eventually coming out as national winners wielding the glimmering trophy. 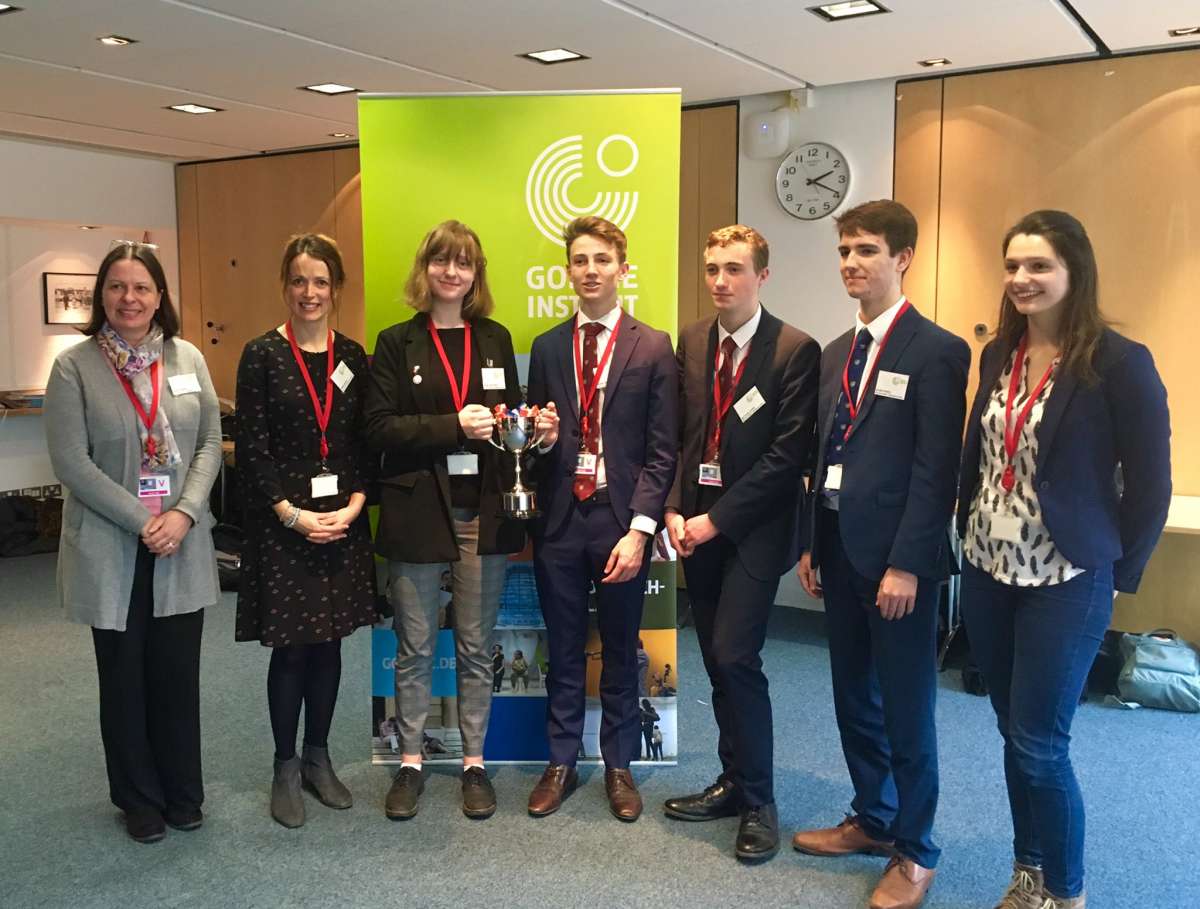 In the semi-final on the 12th March, Challoner’s were pitted against Wellington College. After thorough preparation, we were ready to argue against the proposal that “Only electric cars should be allowed in Europe by 2025.” We explored flaws in the practicality of the proposition: the current lack of renewable energy sources to generate enough electricity for the cars and the need for new infrastructure to be installed. Strong speeches, convincing counter-arguments and exciting idiomatic expressions ensured a Challoner's victory in this round. We had confidently made it into the final of the competition. 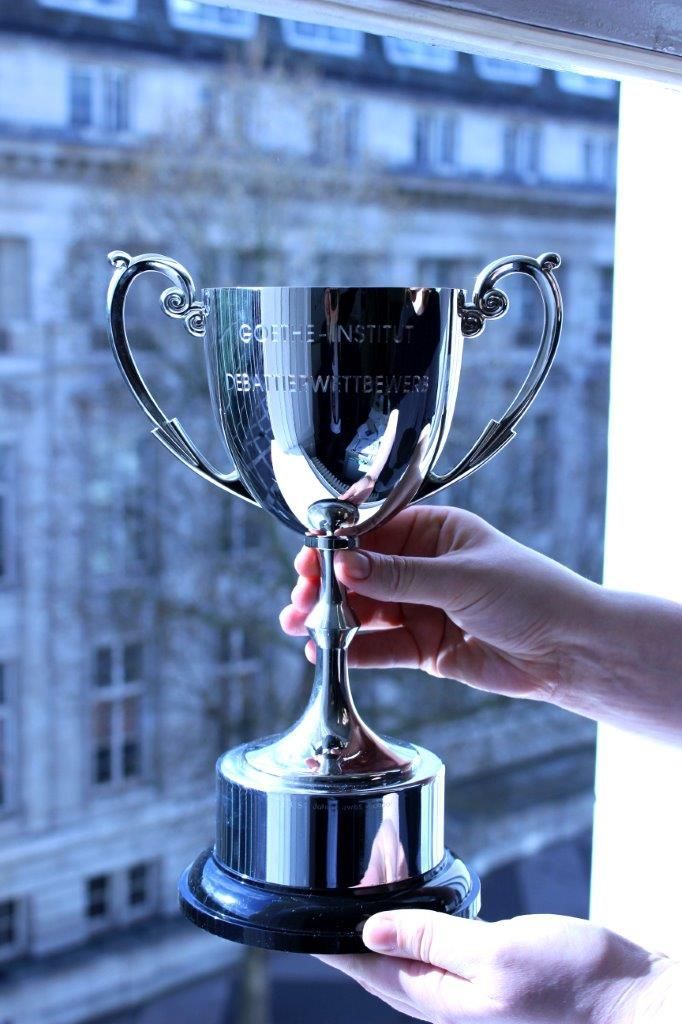 With little time for recovery, the new topic for the final was announced shortly after the semi-final; DCGS was to present views in support of the statement “A subject called Europe should be introduced in schools.” Due to face Hampton School, we knew we would be up against very capable opposition and we delved into researching and composing our speeches without hesitation.

When the long-awaited day came around on the 27th March the Challoner's team made their way to the British Council near Trafalgar Square. Fellow pupils, parents and teachers including the Headmaster came to spectate on the day of debating. Both sides performed with enthusiasm and spontaneity, all whilst speaking in German.

Undoubtedly, this was going to be a close round. Facing our strongest opposition yet, we managed to maintain composure and gained valuable points with some entertaining German jokes and pertinent references to European cuisine. Although debating for the statement was no easy feat, we focused on the need for new generations to be educated about Europe's politics, geography, history, and culture. We share so much with Europe - how could school pupils not be informed of this? 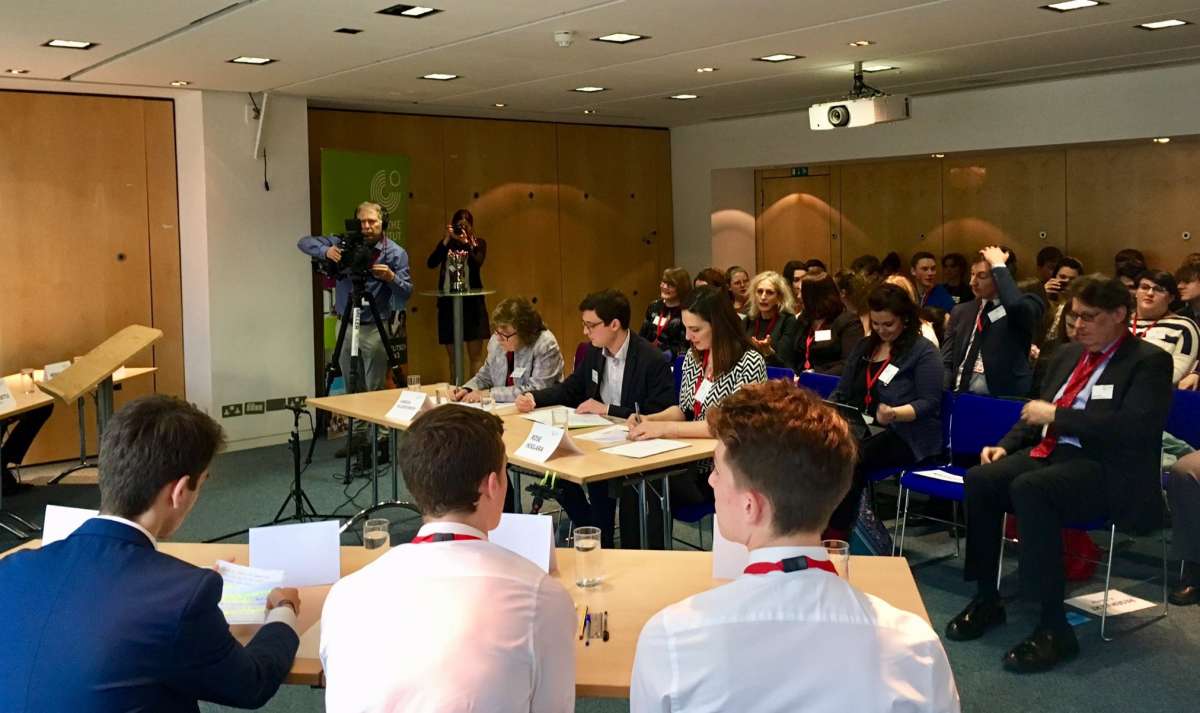 After the judges discussed the two teams' performances, they reached their verdict and Challoner’s emerged victorious. The Goethe-Institut rewarded us with excellent prizes which included a travel voucher for each member of the winning team alongside the coveted trophy.

Debating in this competition has been very rewarding for all students involved. Thanks must go to Mrs Whittle and the German team for their support.