Squash Visit from the Pros

James Willstrop and Mathieu Castagnet, seeded 8th and 19th in the world respectively, gave a rare visit to the Challoner’s squash squad and Chesham Bois Lawn Tennis and Squash Club on Friday when they visited Chesham Bois for a coaching clinic and an exhibitor match.

Challoner’s boys were given the opportunity to experience being taught by these world-class players. It was an amazing experience to play against such talented squash players. The clinic consisted of a three-quarter court against the pros, who played well, getting everything back but trying to give us a chance. It was an incredible experience that has undoubtedly improved our performance. We will certainly take away the methods of disguise that were so effective in wrong-footing the opposition players.

After the coaching clinic Willstrop and Castagnet then played an exhibition match which was extremely enjoyable to watch. The players went on court at 7:15 in front of a packed stand; cramming 100 people behind a single squash court. The match proved to be ferocious but at the same time very light-hearted. Players poked fun at each other and also at the marker. In the end Mathieu Castagnet came out on top. 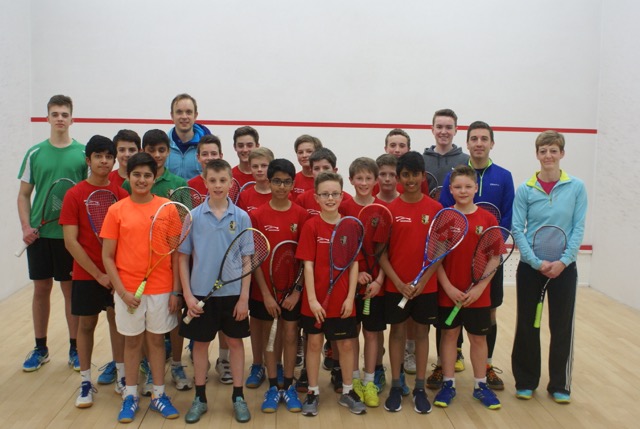 We were both most impressed by how easily the players could return low shots and how comfortable they were with them. This showed how much of a difference there is between them and us. Saying that, they did both give us amazing advice and encouraged us to strive to achieve the best of our ability. Hearing their stories in person had an amazing effect on us and in the power of their words they showed us that if you put the effort in anything is possible.

The players were enjoying it so much they proved very reluctant to come off court! Overall, the visit proved very enjoyable and also greatly improved our squash performance. Thank you to Sam Mueller (Challoner’s squash coach) and DCGS for enabling us to have such a fantastic experience.