A Variety Show of Education at Science Live Science students in Key Stages 4 and 5 have taken several trips into London this year for the Science Live series of lectures, and the range of speakers and subjects they have played audience to has been broad and exciting. 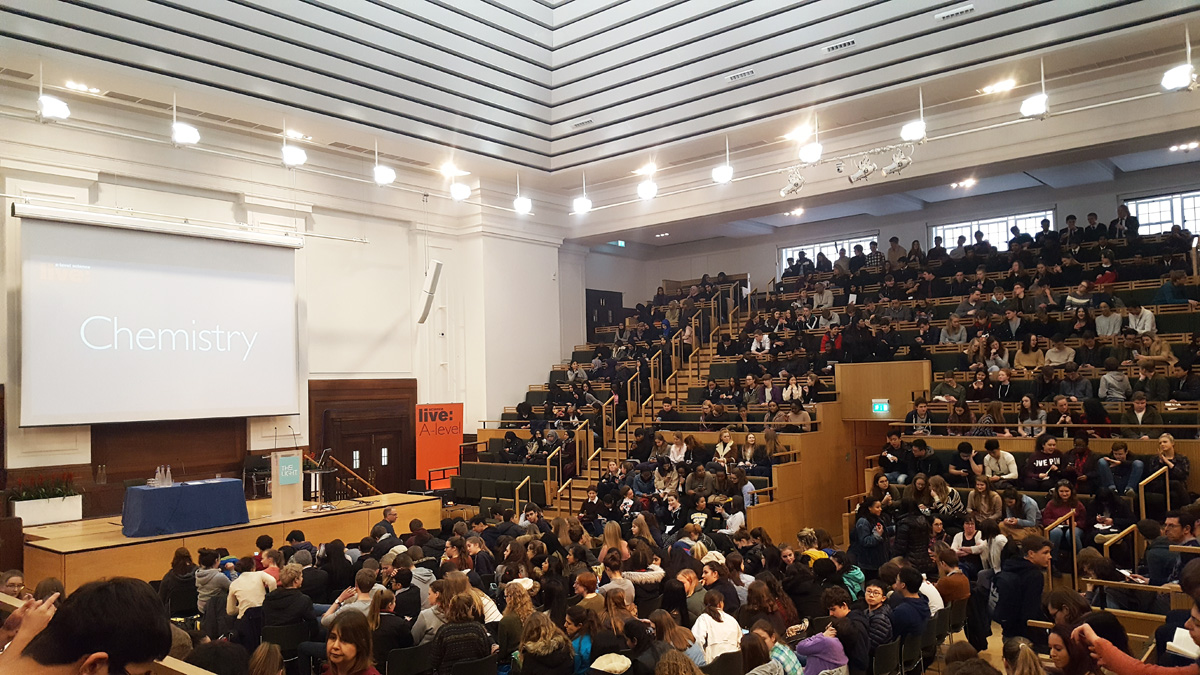 Dr Emily Grossman opened proceedings for Year 13 in December with her talk titled ‘How to Build a Human,’ where she dived into the subject of stem cell science and regenerative medicine. She talked about our developing skill in growing different body parts and healing people. She also touched on the subject of cloning and the fact that something that is normally considered the stuff of science fiction is becoming an ever-increasing possibility.

Dr Adam Hart showed us what we can learn from bees. He talked about the social aspects of bee and other insect communities; how the queen is purely there to pump out eggs, with all the others there to take care of her and subsequently the eggs. He also talked of leaf cutter ants, how they seem to have developed an agricultural system long before we ever did.

Dr Jenny Rohn talked about the growing problems we are facing in the form of bacteria. She gave an excitable talk about the issues that are showing themselves, with the antibiotic resistance of sever ‘superbugs’ becoming more and more of a challenge. She gave examples of e.coli and the different variations which we are facing. She also talked about penicillin, the drug famously discovered by Alexander Fleming, and how bacteria are wising up and becoming resistant to even this staple of the medical world.

Professor Andrea Sella presented the lecture ‘Strange Ice’. He explained how it was odd that ice floats on water, as no other molecular substance can be a solid that floats on its melt. To show why this happens, we had to look at the phase graph of water, introducing pressure as a contributing factor to the strangeness of water. It was very interesting that such a common compound can be one of the most abnormal.

Professor Jim Al-Khalili questioned our perception on time-travel. He set our brains set into motion as he explained all of the intricacies of time and its relation with black holes. He then proposed the idea that a black hole may even be a wormhole which could take you into a different part of the universe or even into a different universe altogether!

This was then followed up by Dr Maggie Aderin-Pocock, who you may recognise from presenting The Sky At Night on BBC 4. She told us how humans could live on certain planets other than earth, provided that the conditions were habitable for humans. She then told us about how there is an opportunity to go on a one-way trip to Mars through Mars One. This sparked up interest in the audience - especially that the prospect of living on Mars may once become a reality.

Back on Earth, Professor Dave Cliff condensed the previous 50 years and the next 50 years of computer science into a 20 minute presentation. In this time, he was able to show how computer science has made huge strides to become what it is today and how it will be changing with new developments and some potential challenges it will face.

Year 12 also explored a range of topics. Journalist and broadcaster Dr Michael Brooks gave an insightful talk which explored what we know - or rather don’t know - about gravity, whilst CERN physicist Dr Tom Whyntie discussed the many particulars of particle physics. Later in the day, science broadcaster Prof Lucie Green explored the universe with us, Dr Andrew Pontzen spoke on the strange matter that is dark matter and BBC Science presenter Dr Helen Czerski gave a talk on the surprisingly secret life of bubbles. Finally science broadcaster Prof Jim Al-Khalili OBE questioned the controversial world of free will.

A staple of all the talks was the revered Lord Professor Robert Winston. This pioneer of IVF treatment presented the field of reproduction and embryonic diseases. He also showed us some of the work his colleagues have been doing with genetically modified organisms and the social and discussed the ethical issues in genetically modifying humans. Challoner's students have received lectures from Professor Winston on a number of occasions, and it is always an exciting occasion.

As well as this vast wealth of intriguing information, we also heard a number of talks about the best ways to perform well in our exams, and different techniques we can use to make the process of revision and exams easier and more success. We would like to say thank you to all involved at Science Live and at Challoner's in making these excellent visits possible.