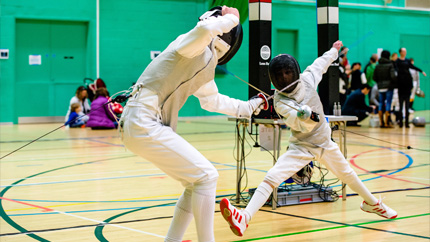 Fencing is an uncommon sport, but for Kishan Sisodiya in Year 7 it is a hobby and a competitive sport which he does every week. He plays at Three Rivers Young Blades club in Rickmansworth, and has been fencing since he was eight years old. He says, ‘I took up fencing as a sport because my dad used to fence when he was younger and I want to try and follow in his footsteps. My brother fences as well and we both love fencing.’

In 2009, when Kishan joined the club, he said that, ‘I felt a bit nervous about starting something new, but fencing was easy to pick up and I learnt it fairly quickly.’ He regularly attended fencing and became better and better, and at the age of 12 he entered his first competition. He did quite well, winning most of his matches. He says that his mum and his coach have inspired him to keep on going and striving for greatness in fencing, and they have always supported him.

His favourite move is the primé flick, which involves a whipping motion that exploits the flexibility of the blade. He says it gives you a great feeling when you pull it off, as you feel you have done something really skilful. This year he achieved his greatest success yet by winning the Hertfordshire under 14 County Championship, which is an outstanding achievement. He won 10–4 in the final. Also, his club have won the most medals ever in County Championships, and his coach is a former Cadet British Women’s Foil Champion and has represented England.

Congratulations to Kishan for all his hard work and achievement in fencing.