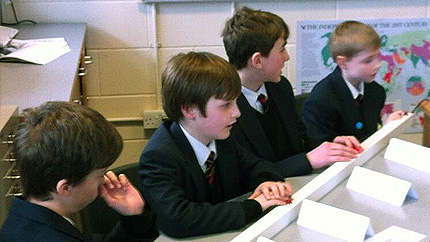 On Monday 3rd March, the Junior Schools Challenge quiz teams travelled to Haberdashers’ Askes’ Boys School to take part in the regional finals. In the group stages our B team - of Marshall Scott, Redford Denson, Barnaby Flower and Himanshu Singh - performed well but were unlucky to lose out to Aldwickbury School’s A Team by the close margin of 500-400.

The DCGS A Team then won their group stage match 410-340, setting up a semi-final against Aldwickbury. This match saw the team of Jake Longhurst, Fraser Barnes, George Corby and Freddie Nash surge to victory by a margin of 550 points to 230, displaying some exceptional general knowledge on subjects ranging from types of dog to classical composers.

The final saw Challoner’s pitted against the hosts – Haberdashers – who had been national champions the previous year with the same team. Despite our best efforts, we went down to a heavy defeat, but with three of our A Team in Year 7 we should have an excellent chance to progress further next year.